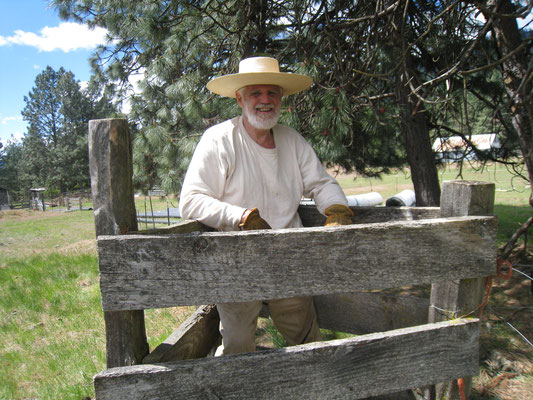 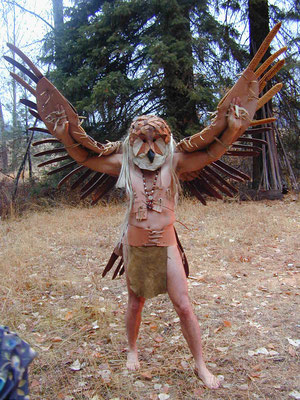 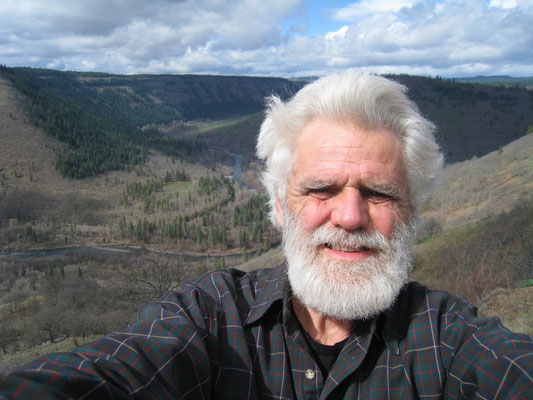 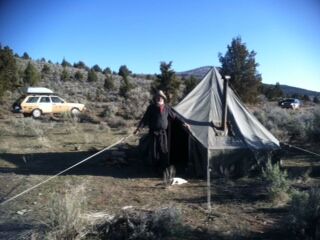 I was born in Altadena CA near Pasadena.  At the time my father was going to college to become a Nazareth Minister.  At age 2 we moved back to Penticton, B.C. Canada, then to Livingston, MT, then Lander, WY, then finally to Ridgefield, WA.

My father died shortly after retirement.  My mother however, lived another 20 years.  She was more prepared for retirement as she had her friends, her garden, and her hobbies.  I chose to emulate her life opposed to my fathers.  It just seemed to make sense in the long run!

When I was 10 years old I wrote a short book titled "The Balance of Nature".  I was laughed at then and it seems like an impossibility now - to put all our roads and cities underground and encourage the Earth to grow wild once again.  I had visions of massive salmon runs and herds of buffalo returning to the West.

I learned to work with wood in high school wood shop and apprenticed as a carpenter in the pole building trade.  I learned remodeling and auto mechanics within the necessity of fixing up old houses and cars.

Money making schemes have not been my forte. I have had some lucky real estate deals but paid jobs have been my main source of income.  Learning how to live a champagne lifestyle on a beer budget has been my Modus Operandi.

Are there many paths that lead to the center, the higher self? If we can get a grasp of what is Quality in our lives and try to balance the Heart, the Mind and the Stomach, then maybe we might be able to find more balance in our life?

I do not find this easy myself because I follow my passions - using them for my fuel.

On my long hikes, that I love, I notice a definite reciprocity from Nature when I maintain a humble thankfulness for every blessing, every barbed wire fence crossed safely, every resting place found and for not leaving behind an essential tool such as a knife or field glasses. And in the evening I am met by the best campsite spot I've seen on that day's march. Strange sounds out of nowhere getting me to stop and notice biscuit roots popping out of the ground at my feet, from the frost heave! Spilling boiling hot water on my bare foot only to have a cold wind hit it instantly, cooling it with no injury. And many other miracles!

YRU! Maybe this is where my philosophy begins: with these acronyms. Y R U. Why Are You? WAY. What is the WAY?

When I am not immersed in Nature it is harder to maintain a humble thankfulness for every blessing and everything seems to get blurred and buried under my material and social culture. I look at this as an anachronistic life style yet I know it still underlines everything everywhere!!!

I was raised by protestant ministers of the Church of the Nazarene and I could not help notice a lot of hypocrisy around me, so I distanced myself from the church as soon as I could. I did observe the advantages of a strong faith in certain people and have tried not to "throw the baby out with the bath water" so to speak.  I have read the Bible and enjoyed its many stories yet, as far as I can tell, overall the text has caused as much harm as it has caused good. I personally think the best approach for any human being is to question all of the Root Documents of our culture and as we race headlong toward our own self caused extinction, I think we should question everything we have been taught!

I believe that the environmental degradation of the planet and homelessness are the direct byproducts of the Capitalistic precept that: Profit is the Bottomline. I think this behavior is a direct result of the culture we have learned!

Is in my music

Trying to out smart

Everything is waiting for someone to die

The Trees the Hawk in the sky

Just think, You may be next and

what would be your

contribution to the ground?

Will the roots of a seed bearer

delve into that place

once held your adrenaline?

And who will benefit

from the Akashic Record

of your every thought,

the Whales in the

The very bottom that

It will take me forever to walk to Alpha Centauri and

the Universe has more stars than my Brain has Synapses and

My Mind can perceive many opposing Forces.

Yet what if I could not discern the difference

between Light and Darkness or

between near and very far away or

between large and very small or

between hot and cold or

between Male and Female or

between Good and Evil.

Would I then be God?

Life I think is beauty and

so kind, and so cruel and

so tenacious and so frail and

Will the beauty I see as you ever fade or

I think you know you are beautiful and careful

I am humbled and

How often does a man

kneel before a Goddess and

fit her into a suit of wings

Then watch her fly away

with no fare well?

To imagine seeing so far and

its passions, its joys and

Its fears and its sorrows

its hopes and dreams,

Only another Artist on the Road?

My memory of you a bookmark

fading from my page.

The way you held your wings

the strength I felt beneath your clothes,

a deep well of universal tribe.

Waking from my dream

on all the drums

I open the basement windows

hoping it was you.

I am still a wounded man

Walking in someone else's shoes

And I do not have enough grief

To set you free to return

As a helpful Nature Spirit.

With your red boots on or off

And I still respect you

Marrying in a red shirt

Adjusting to the load

She is so strong

So easy to break

Yet hard to split

And you come down

My wants got in the way

I apologize to all

When my needs, become your wants

A reflection of the divine shines in you

And in my eyes.

And the cold nights

In the birch forest.

Drawing patterns on the ice

So intense in tents

Locked in the deep freeze

Where fat rules the land

Where the Rooster’s crow

And the ax and knife

And the straight grain Spruce

Is a saving’s grace.

Fire on a cold Mountain stream

Where the wants of others

Sleeping on the Earth

The pervasive and penetrating

One head on my side

And your’s is other

And his attack Rooster

And a horse’s hard hooves

Uneasy in the wind

Who cast that brass

With a pure tone

Played by a connoisseur